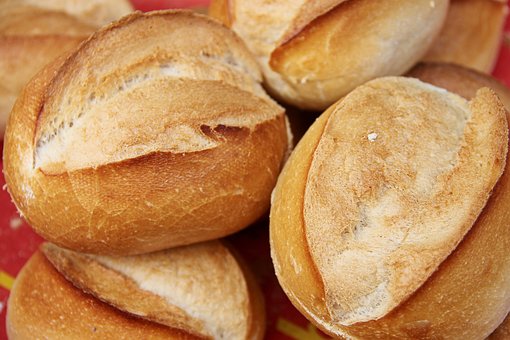 Pam made a number of her Rustic Spanish Bread Loaves today and we are now waiting for it to cool down sufficiently to taste it. It sure looks good and if the taste is anything like the looks it should be fabulous. I am seriously thinking of making some dipping oil to use with the bread. Here is the recipe which she used to make her bread. If nothing else, it should go well with this day’s meal of spaghetti and meat balls.

Sprinkle the yeast over slightly warm (95 level ) water in a small bowl or measuring cup. Gently stir it gently followed by allowing the mixture sit for about 10 minutes.

Measure out your flour and put it in a bowl of a kitchen mixer with a dough hook attached. If making by hand, put the flour in a large mixing bowl.

Turn on the mixer, add salt into the flour, and allow the dough to mix well. Slowly drizzle the olive oil to the flour as the mixer is running.

Slowly drizzle in the yeast and water mixture, allowing the dough to knead from the machine for four minutes.

If making the dough by hand, combine the flour with the yeast and water mixture using a wooden spoon, then turn the dough out onto a floured surface and knead for five minutes.

After kneading, you should have a smooth, springy like dough that bounces back lightly when pressed with your finger.

Cover the dough while in the bowl with a piece of waxed paper that has been sprayed with cooking spray using a kitchen towel.

Form the dough into two equal-size balls, and place on a 15-inch baking sheet.

Cover the loaves again with waxed paper and a kitchen towel, and let rise another time for 20-25 minutes or until doubled.